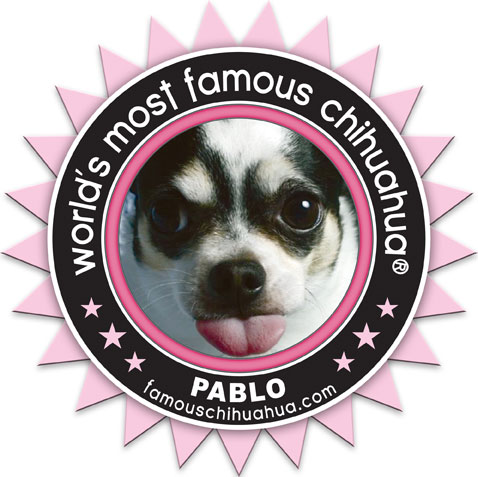 with over 75% of the votes and an overwhelming number of support from all his fans, it is with great pleasure that famous chihuahua® proudly awards the title of the world’s most famous chihuahua to pablo the chihuahua.

in an interview with chad dressen, pablo’s owner and caretaker, famous chihuahua was able to get the latest scoop on pablo’s likes and dislikes as well as what his future holds as he climbs the ladder to super pet stardom.

famous chihuahua: in your opinion, what makes pablo a superstar pooch and why do you think he outnumbered the competition in this celebrity chihuahua poll for the world’s most famous chihuahua?

chad: i think the major appeal with pablo has less to do with him, and more to do with his relationship with ramsey. of course he’s cute and has a ton of attitude, but without his big sister ramsey, i don’t think it would come to the surface nearly as much. unfortunately the funniest, most amazing moments between these two dogs occur when i don’t have them on camera.

the reason pablo convincingly won this celebrity chihuahua poll, in my opinion, is because people feel as though they know pablo personally. i post new footage of pablo every couple weeks on pablo’s youtube page, whereas people have very limited access to the other famous chihuahuas.

pablo has over 14 million views on his youtube videos and gets about 25,000 views per day. i think his availability with just a click of the mouse is what has made him so popular. if you see someone enough, you begin to feel as though you know that person (or chihuahua in this case).

chad: if pablo could speak, i think he’d be in heaven. he could harass ramsey verbally as well as physically. i think that little bugger would thank himself and move along – although he’s a smart little guy – he’d probably give me a shout-out in hopes that it would lead to extra treats later on.

how old is pablo?
chad: pablo will be six on october 15th!

favorite past time?
chad: that’s easy, annoying ramsey to the brink of insanity.

does pablo have a female chihuahua love interest?
chad: pablo has several love interests, however he has asked me not to divulge any names. he is currently single and not interested in a relationship at the moment. he claims he’s just too busy with filming to get into anything serious right now. sorry ladies.

famous chihuahua: what can pablo fans and followers look forward to as his career continues to unfold? does he have any signed movie deals lined up? celebrity pet appearances?

chad: well, i’m currently working on the ramsey and pablo dvd that will be out by late winter or early spring. it will include their greatest youtube hits as well as lots of never-before-seen ramsey and pablo footage. there will also be a bloopers section!

at this time, there are no signed movie deals, but there is talk of a possible appearance on a major network television daytime talk show, this would be their biggest tv appearance to date!

famous chihuahua: as an advocate and promoter of chihuahua causes and interests, what message, words of wisdom or advice can you offer to chihuahua owners everywhere?

chad: i get a lot of people who come to me with questions that are usually behavior-related, but i explain to them that i am not an expert and can only tell them what worked for me. i strongly feel that every dog is unique and that using common sense in all situations is the best approach.

overall, the best advice i could give all pet owners is to love and respect your pets and they will show it back to you tenfold.