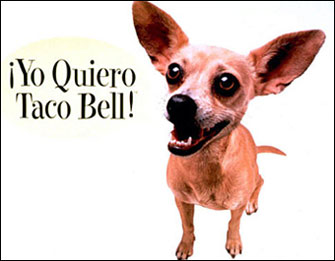 the taco bell chihuahua and a few of his canine stars took a trip to tijuana. they went to a doggy bar and got a bit drunk. as they crossed back into the united states, the border guard stopped them…

the guard asked each of the other three hollywood dog stars the same question and waved them each through. when it was time for the taco bell chihuahua to pass, our little star showed the guard his green card while wobbling from side to side. the guard studied it carefully and asked some questions of the tipsy star.

the border guard was still suspicious so he said, “i’ll let you pass if you can use three words in a sentence.”
“no problem, senor.” our little star replied.
“okay, use green, pink, and yellow in a sentence.”