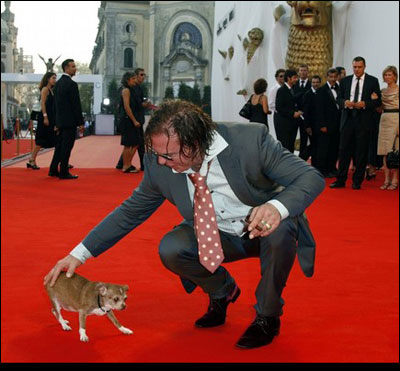 actor mickey rourke recently won a golden globe award for his highly acclaimed role in the film the wrestler. in his acceptance speech for the well-deserved award for best actor in a motion picture drama, he thanked his dogs first and foremost for their continued support and life companionship.

“i’d like to thank all my dogs. the ones that are here, the ones that aren’t here anymore because sometimes when a man’s alone, that’s all you got is your dog. and they’ve meant the world to me,” said mickey rourke.

mickey’s speech is to be commended. he reminded us that our pets are our companions and best friends in both good times and bad. no matter what, our pets will always provide us with unconditional love so it only makes sense that he would thank his dogs for this.

“she’s like a giant xanax, you know? i’m not going to get religious on your ass, but i truly believe god created dogs for a cause. they are the greatest companions a man could ever have,” says mickey about his 16 year-old chihuahua-terrier mix loki. 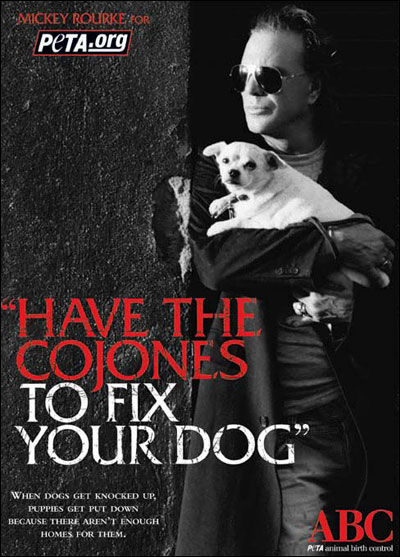 mickey and his other chihuahua jaws also star in peta’s latest abc ad that promotes the spaying and neutering of pets. in the ad mickey urges people to, and we quote, ” … have the cojones to fix your dog. when dogs get knocked up, puppies get put down because there aren’t enough homes for them.”

peta’s campaign is aimed at knocking out animal overpopulation. every year, millions of unwanted dogs and cats are left at extremely crowded animal shelters, where most are put to death.

less fortunate unwanted animals are abandoned on the streets to fend for themselves and often become victims of traffic, disease, starvation, and extreme weather. some are stolen by laboratory dealers or used as bait by dog fighters. two simple surgeries—spaying and neutering—are the solution.

you too can help support peta’s work to improve the lives of dogs, cats, and all animals who are suffering from cruelty and neglect by signing peta’s pledge to end animal homelessness