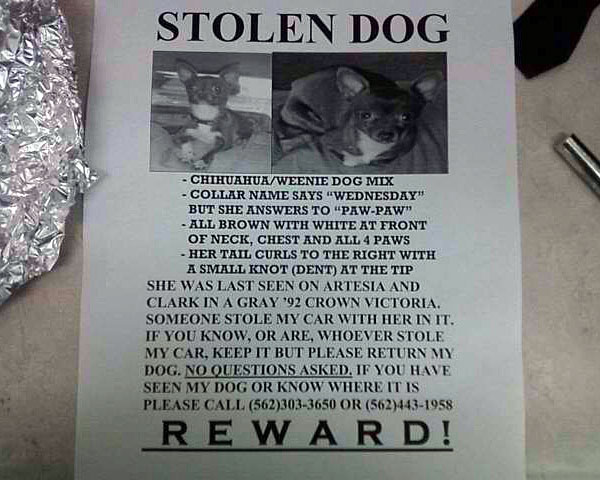 my name is diana and i am sending you my story with the hopes that your website visitors may be able to help me find my chihuahua. i just don’t know what to do or where to turn anymore and am hoping you can help me. there’s a chance that just maybe, a site visitor of yours has seen my chihuahua.

my chihuahua’s name is wednesday, but when she was a puppy, my fiance and i nicknamed her papa, which coincidentally means little potato in spanish, laughs. she responds to wednesday but family calls her by her nickname, unless of course she is about to attack our poor innocent beanbag chairs to which a sharp, “wednesday!” lets her know to be good. 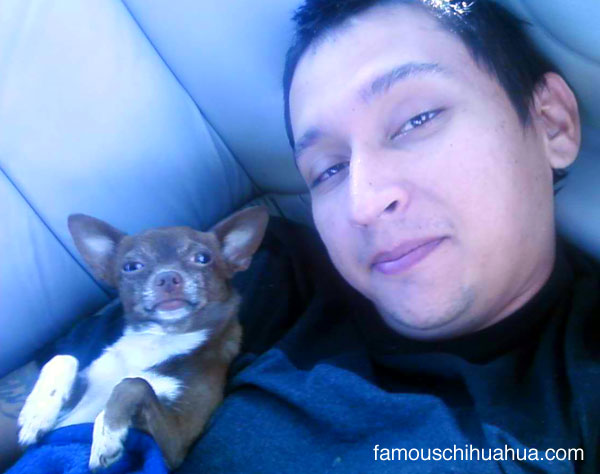 wednesday was born on cinco de Mayo of 2008 and was the most handsome little lady you’d ever seen. she was born to my mother’s chihuahua, tita, beautifully classy chocolate dame that was the most motherly and caring dog i’ve ever met. she reminded me of nana from the disney film peter pan. tita passed away the day before my 23rd birthday, august 15th, 2010 from heart problems. she was 10 years old.

she had been with me all throughout my teenage years and watched me turn into a young adult. i come from an abusive household. the only one that was always there for me to pick me up and dry my tears was my tita. she defended me and jumped at whomever tried to lay a hand on me. despite her size, she thought she could take on anyone.

i ran away from home when i was 16 and couldn’t take her with me but i told myself that when i turned 18, i would go back for her and i did. i’ll never forget her face. she was more excited than i was! her tail was wagging so much that her front paws would lift up off the ground! i promised her i would never leave her like that again and i took her home with me.

one day, on a play date with other dogs at the dog run, i got caught up talking to a new friend and i didn’t notice that my tita had sneaked off to a corner with her beige boyfriend, guero! alas, she was pregnant with 5 adorable little chocolate/red puppies. i gave them all to loving homes except for one of course my wednesday. 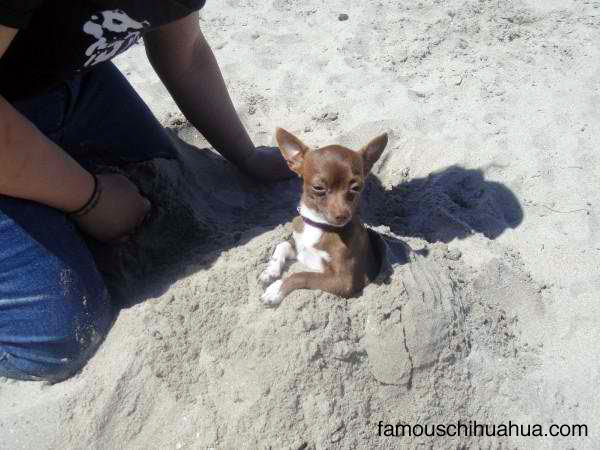 wednesday loves to go to the beach. she also likes to scurry up onto your shoulder when you pick her up and view the world from up high. just like her mother, a car ride was a grand adventure that had to be experienced while sitting at the rear window. She always crawled under anything that would cover her completely and stick her tiny face out to people watch and if me and my fiance were having our alone time just cuddling close, she always had to find the tiniest gap between us and squeeze herself right in the middle. this was our family.

when tita passed away, i made her a promise, to take care of her baby wednesday to thank her for the way she took care of me. my fiance and i had just moved to california to look for jobs since it was looking rather bleak trying to find work in las vegas. his mother had invited us to stay at her house so we packed our bags, moved in and within the month found employment. we saved up for a car, a grey ’92 crown victoria with the help of our little wednesday because in march 2010, she gave birth to 3 adorable little baby chihuahuas. cream, tan and blue.

while we were moving, i left wednesday with a friend in vegas and her tan chihuahua, spike. when she returned to us, i didn’t even know she was pregnant, she barely showed! we only found out when we took her to the vet for her annual check-up. she was so tiny and i was scared i might lose her when the time came for her to give birth, but she ended up having a natural birth with no complications! i was so proud of her, and so was she.

wednesday relished showing off her pups to us. the very first day her babies opened their eyes we rushed off to the beach. we wanted their first view to be the ocean. we sold her tan and blue for $200 each and gave the cream one to wednesday’s mother-in-law, spike’s owner.

shortly after we purchased our vehicle, things became complicated at the house and we were again forced to move out.we had no one. no friends. no family. everyone was in las vegas, but our jobs were in california. we had no other choice, but to temporarily live out of our car until we could find a new place. it was just us three, our little family.

the first month was hard. every time we saved up to get an apartment, the car would break down and all our money had to go to fixing it. needless to say, it seems as if wednesday loved living in the car, and i have to admit, i began to grow a tad fond of it. my fiance worked the night shift so during the day, which is when i worked, wednesday and him spent it together. we couldn’t believe we were homeless. we actually learned that we were “mobile homeless”, since we had a vehicle and an income. 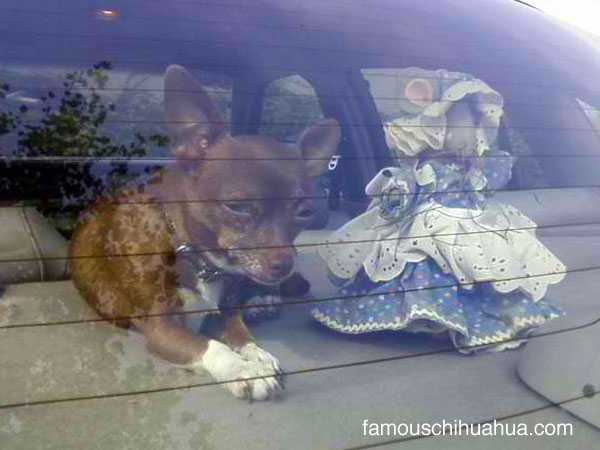 we met several other mobile homeless, many who were also living with their pets. we showered at the gym, yes we had gym memberships. i know it makes for a false economy seeing as we couldn’t even afford an apartment, but we needed to shower! we took wednesday to the pet salon often. for her, it seemed like nothing but a never-ending car ride with stops at the park every day! it was a bit of a hassle, but we started to get used to it. having employment, it was a lot easier being homeless than we thought.

everything seemed okay, until one day on october 6th, 2010, our lives changed. it started off like usual. we woke up, drove to the park, walked wednesday. drove to the gym, showered. went to get breakfast and then my fiance dropped me off at work. the only thing we did different on this particular day, was that my fiance had to go to the dmv before heading back to the park like he usually did.

the dmv parking lot was full, so he parked on the street a block from it. he texted me to let me know that he had just arrived to the dmv and was going to leave wednesday in the car since they didn’t allow dogs inside. 10 minutes later, i got the phone call. after picking up a number he had gone back to the car to check up on wednesday and the car was gone! the car was gone with wednesday in it!

he called me and i excused myself from work and ran to the dmv. the car really was gone! wednesday was gone! we called the police and yelled at ourselves and each other. we thought maybe the car had been towed, but the police said no, the car was stolen. our home was stolen with our wednesday and our valuables in it. i let my tita down, her baby was stolen. 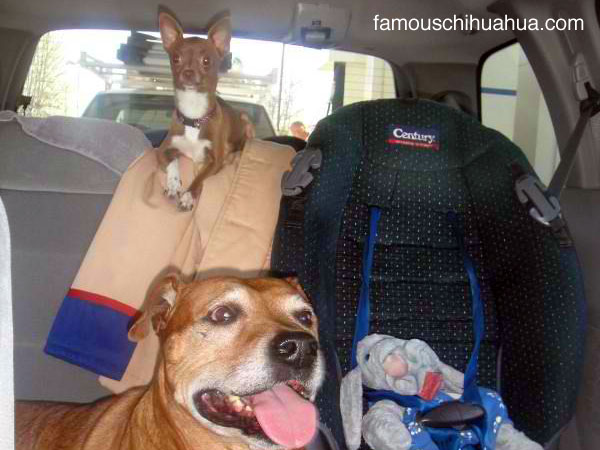 to this day, the car has not been found. we put up flyers everywhere and even said that if you knew or had stolen the car that you could keep it. we just wanted our wednesday back.we checked the pound every week. we put up classifieds. we checked the pictures on seacca and petharbor every day.

i know wednesday is out there somewhere. whoever stole the car knows where she is. they must have kept her because no one has turned her in! if they didn’t keep her, they may have sold her!

please! if you are reading this and recognize my wednesday, contact me! i am offering a $500 reward for her, no questions asked. it’s all i can afford. i want to my family back! i don’t care about the car or the valuables in it, i just want my wednesday back. if you wish to remain autonomous, then please post an anonymous comment here.

i would dearly appreciate any help that your readers might be able to give us! i’m trying to put it out there as much as i can, someone has to know where she is! someone has to recognize her picture! please, whoever you are, give me my sweet little wednesday back ….