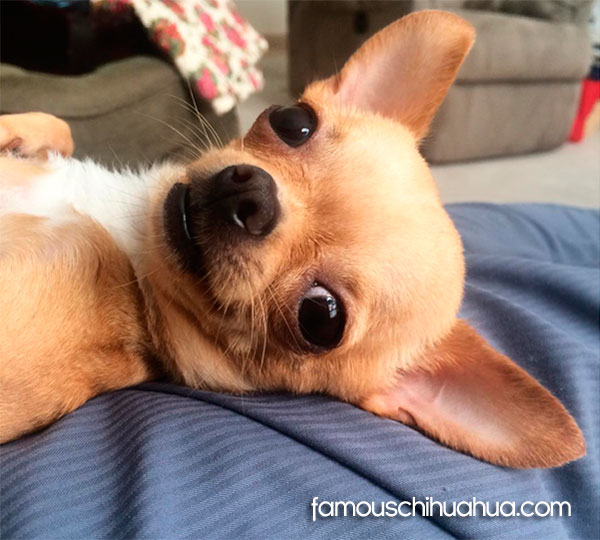 here is the amazing survival story of wheels the rescue chihuahua as told in her own words! …

“when i was born into a neighborhood pack of dogs, the humans that found me said it appeared i was a stillborn baby.  i was born prematurely and was given little to no chance of survival which was confirmed by several vets.  when mom took me home i weighed a mere 6 oz at 10 weeks.

i was infested with worms, fleas, and mites.  i had a heart murmur and no skull covering half of my head.  my mom decided that she was going to give me every chance she could.  i had major issues with eating and drinking.  i refused both. the vet said i had “failure to thrive”.  mom syringe fed me around the clock but i continued to lose weight. 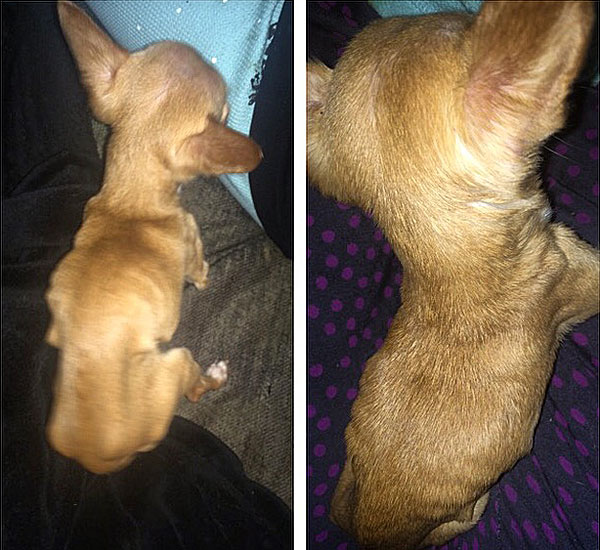 “i was so thin and skeletal and was clearly starving to death.  the vet had no idea what to do.  they suggested euthanasia.  mom found me better food and stepped up the number of times she was force feeding me a day and i managed to gain some weight.  i still wouldn’t eat or drink on my own and it clearly affected my general health and energy level.  things were not looking good.

mom took me back to the vet. they did all kinds of blood work and suspected i had some sort of congenital liver and or kidney defect because of the way i was born. they said they could send me to a nutritionist but it would be a waste of my mom’s money because i wouldn’t make it and the right thing to do was to have me euthanized.  my mom was angry and felt that the vet was not trying hard enough!  she decided to turn to using all natural high end food and homemade food.  i got worse and started vomiting later that day.  all night my mom syringe feed me pedialyte.  i couldn’t even hold myself up and only wanted to sleep curled up on mom’s tummy.

my mom decided if i was still suffering in the morning, it might be time to let me go. miraculously, i was a bit better in the morning!  we went straight to the vet who gave me anti-nausea meds and fluids and sent me home.  i gradually improved with syringe feedings of homemade food and water around the clock.  the vet didn’t know why i had improved, but told my mom that my prognosis hadn’t changed.  i was playful and happy again at home but i wasn’t out of the woods yet.

i began to stabilize under mom’s care of syringe feedings of healthy food.  i still refused regular food and water, but i didn’t vomit and become listless anymore.  the vet decided i was well enough to get a round of vaccines and after having them, i became dangerously hypoglycemic and unresponsive.  the vet rushed me to the back and was able to revive me.  at this point my mom was adding every type of gel supplement to my diet that she could find.  i was putting on weight, but i was still too thin.” 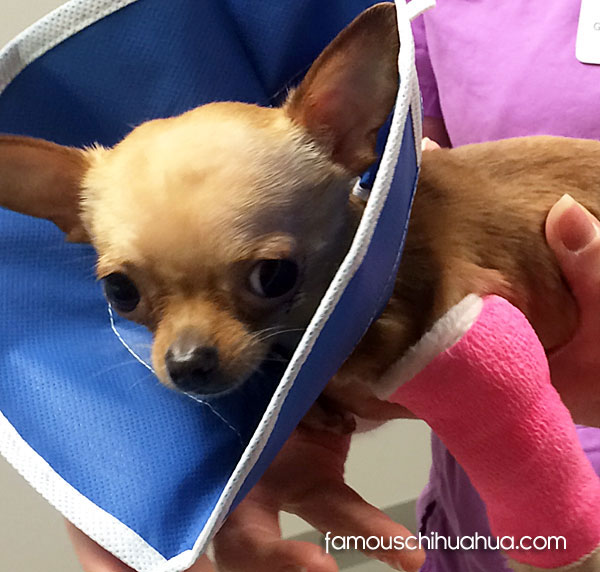 “i was hanging on with four syringe feedings a day and was improving moderately.  then, due to my extremely small size and severe undernourishment, i shattered my front leg taking a little spill off of a rattan sofa.  i was rushed to the vet and then to an orthopedic surgeon who specialized in treating small animals.  he did an amazing job of repairing my paper thin bones and placing a tiny little plate in my leg to make it stronger.  i was soon home with mom recovering and continuing my daily feedings.  i had to go to the surgeon weekly for checkups and bandage changes, but i was healing nicely!

i healed faster than anyone thought i would and finally had my cast taken off.  syringe feedings were still continuing, but mom wasn’t having to use rescue glucose gel often anymore.  she used to have to use it 8-10 times a day!  things were starting to move in a better direction.  i had more energy and was loving and playful.  i was very happy, but i still didn’t have an interest in food and mom decided that the last two pieces of of my recovery would be for me to eat naturally on my own so i could be a healthy weight for my tiny size.  well, it turns out that mom got more than she could have hoped for!” 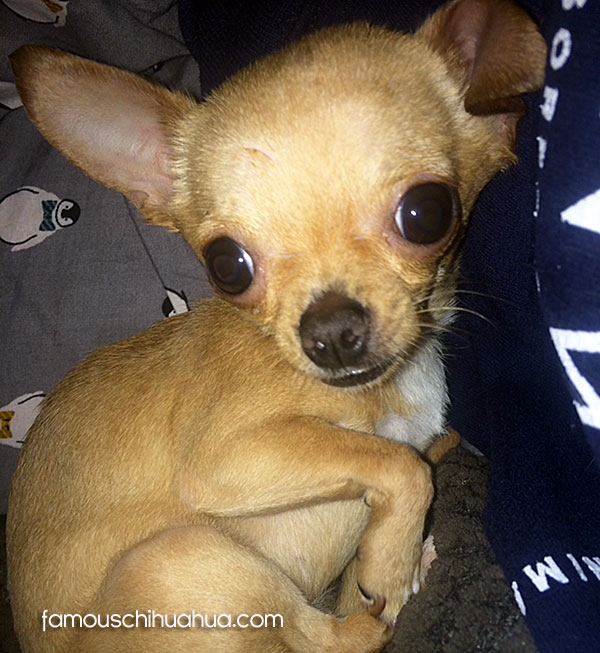 “here i am curled up in mom’s lap after a feeding.  my leg is all healed!  i was having no more episodes of vomiting or life-threatening hypoglycemia and i had put on a tiny bit of weight.  it seemed i was stabilizing even though i was still underweight and had yet to eat or drink on my own.  mom was able to graduate from syringe feeding to hand feeding, which was a huge hurdle in mom’s mind.  we maintained at this state for quite awhile…..and then a miracle occurred! ….

mom’s mother was sick with stage 4 cancer suddenly entered a hospice.  mom had to leave texas (where we were living at the time) to fly to ohio (where we are living now and where my mom’s family lives).  i couldn’t fly with her because i only have skull over half of my head.  pressure in the airplane cabin would cause my brain to swell and this would be life threatening, so family had to watch me and give me my hand feedings.  mom was so nervous and sad without me.  since she had already been planning a move to ohio, she decided to go ahead and have me shipped up by a special ground transport service called precious pets transport.  they drove me from texas to ohio and gave me all my feedings and cared for me.  mom was so happy to see me as we had been apart for weeks!

at this point i was two years old – full grown weighing in at one pound, nine ounces!  mom knew however i  wasn’t getting enough of the nutrients i needed with the hand feedings. i still wasn’t eating on my own and was underweight.  this is when mom was introduced to nancy and shining star pets.

nancy explained that she had developed a super food supplement for her ailing dog casey, which helped heal her and many other dogs.  she sent the supplement to mom and explained how to start adding it to my food in small increments.  after the first day on the supplement, mom noticed i seemed perkier and had much more energy.  she was shocked that something could work so fast!  by day two, i was running when we went for walks which i had never done before!” 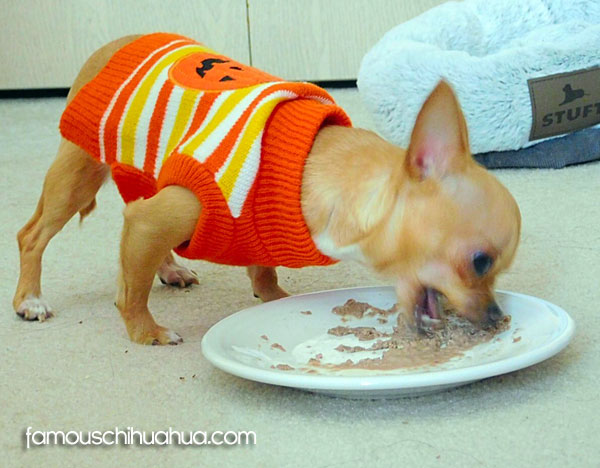 “mom knew then, that something was definitely changing in my tiny little body!  later that day (day two of being on the supplement), the impossible happened!  mom literally couldn’t believe her eyes!  i went voluntarily to my food bowl and for the first time ever , i began to eat voraciously from my food bowl on my own!  mom was in tears and couldn’t believe this happened and so fast!” 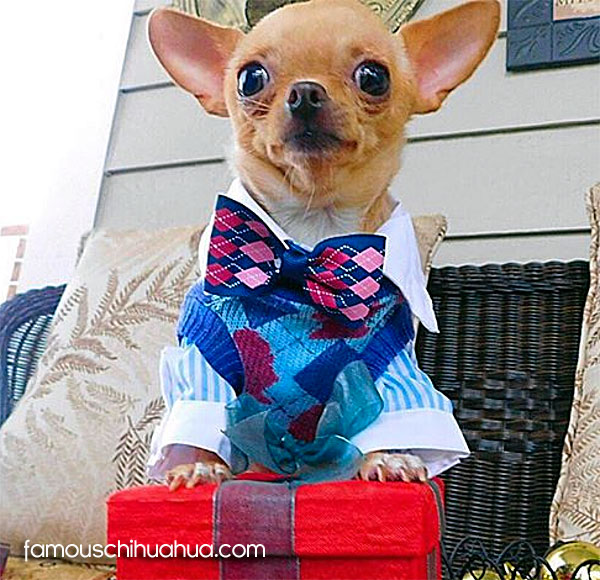 today wheels has a very popular instagram page where she literally turns into a supermodel everyday!  her mommy dresses her up daily in fun and fabulous outfits and costumes and then posts her adorable pictures.  it’s just too cute for words.