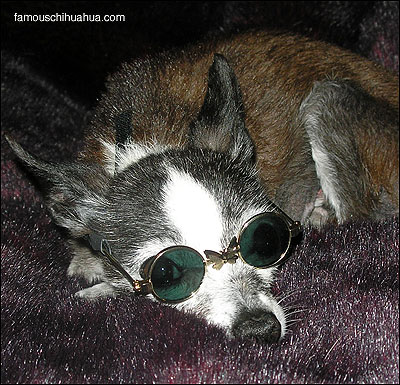 “hello world, i am bristol the service chihuahua! like my specs?”

little bristol was rescued at a very early age when he weighed a mere 1/2 a lb. he had been badly beaten where most of his teeth had been knocked out and his left eye swollen shut. it was later discovered that all his teeth had been removed as well as the lower portion of his jaw.

it’s been four years and bristol is now is a certified service chihuahua that works with developmentally challenged adults in both a therapy and service capacity. he has also grown to weigh a happy and healthy 1.5 lbs and has earned his ‘flying wings’ from southwest airlines.

bristol’s mummy tells us that little bristol is a treasure and one of the most incredible chihuahuas is in the chihuahua world!