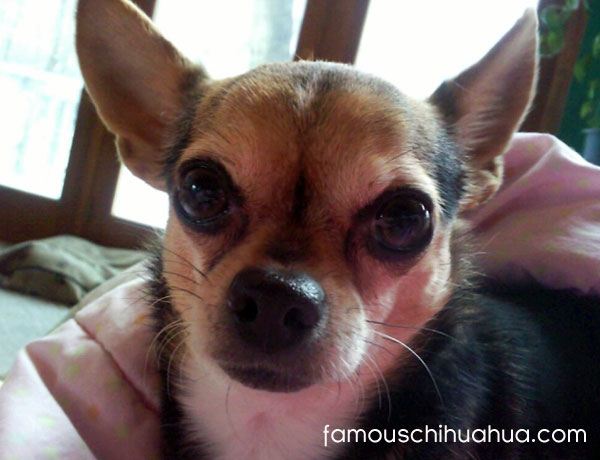 Gus has been featured before on Famous Chihuahua but its been awhile and hes been busy so an update was in order!
Gus is now living in Richfield with his mom, and again he is putting all the dogs in the complex in their place-or at least trying. Since last seen, Gus has lived on the lake with his auntie Gayle and her dogs while mom had some medical issues to deal with-that was a scary time, but with the love of auntie he was able to recover from that scary time, and be reunited with mom, and he is just as sassy. We then moved to Mound for awhile where he learned to live in a house with new people, and with mom there that was okay, but the best part was moving back to an apartment and having mom all to himself again! Gus is most happy basking in the sun during afternoon walks, snackin on Beggin Strips and snuggling under the covers at night. He also enjoys visits from his auntie gayle who he will love forever! Life is good for this little chihuahua!

“hello world, i am gus the chihuahua! i am a year and half old and a i weigh a perfect 6 lbs!”

little gus lives in coon rapids, minnesota with his mummy karyn roesler and she tells us that he thinks he is security patrol for their apartment building as he can get feisty when people and animals need to be put in their place!

little gus was adopted at a year old and he simply couldn’t make his mummy happier! he loves to snuggle under blankets and he sleeps under the covers next to his mummy every night. 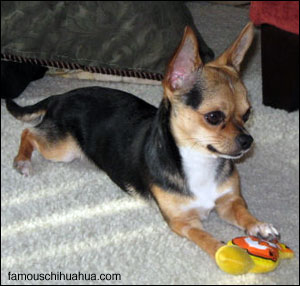 little gus loves to play with his toys from mummy!

gus is unique because whenever his mummy calls him “silly”, it triggers a response where he gets all frisky and fired up and runs around the apartment like a little race horse.