famous chihuahua presents the stories of chihuahuas hector and lola as told by their mommy emily desimone of nashville, tennessee, usa.

“hi, i’m emily desimone. i am a mommy to two adopted chihuahuas, a boy and a girl. the boy’s name is hector and the girl’s name is lola. here hector is wearing his new sweater and proudly showing it off. 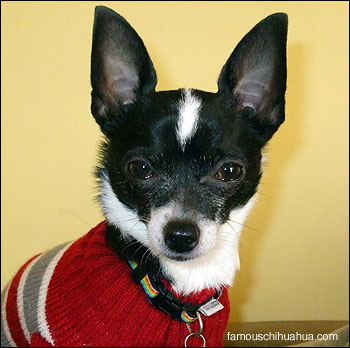 hector was a severely abused and neglected dog before he was adopted by me, therefore, his age is a mystery. although, the vet said he is probably about 6. i adopted in february of 2008. the poor little guy was starved, terrified and eating leaves and drinking dirty water. now he is a healthy and happy little chihuahua.

lola was also an abused dog and was adopted by me in february of 2007. she was abused and then was wondering the streets. a shelter took her in, then i adopted her. the vet said she is about 4 years old.

lola can be such a baby! one day, i gave her a pacifier to play with and she actually put it in her mouth! now, when she wants to be cuddled, she gets to use her pacifier, too! 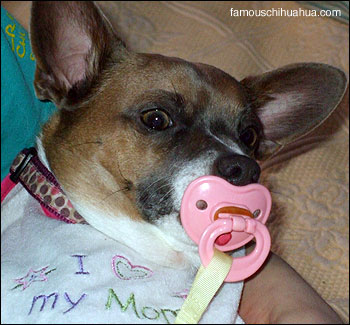 hector and lola are so sweet and caring, and honestly, thankful that they aren’t living where they were! they can be a bit spoiled, but they deserve it!”

the message is simple. if you love chihuahuas, adopt one.