The following article was written by by John Woestendiek of The Baltimore Sun. Famous Chihuahua neither supports or disagrees with his claims, rather we invite you the reader to comment with your thoughts. Are chihuahuas quickly becoming a fashion accessory or are chihuahuas on their way to become the preferred dog of choice? 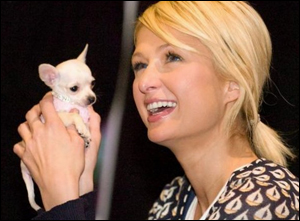 To read the British press, one would think that Paris Hilton and Britney Spears are entirely to blame for the fact that 20 dog breeds are growing closer to extinction overseas.

The Kennel Club in London has released a list of more than 20 British breeds it says have become vulnerable because the public is demanding small exotic breeds like those that celebrities are often seen and photographed with.

The at-risk breeds each had fewer than 300 registered puppies in 2007 — and they include the web-footed otterhound, the Glen of Imaal terrier, and a lot of others you may have never heard of and whose numbers were dwindling anyway, with no help from Paris or Britney.

Also on the list is the greyhound, with just 48 pedigree dogs registered, though the thousands bred for racing there are not part of the kennel club’s count.

Perhaps most nettlesome is that the Welsh Cardigan corgi — the Queen’s favorite, or should we say favorite — is on the at-risk list.

Smaller toy breeds, meanwhile, such as the Chihuahua breed and the pug, the Yorkshire terrier and Shih-Tzu are on the upswing, having been made a fashion accessory by celebrities such as Hilton and Spears. Registrations of those have gone up around 1,000 in the past year.

All this is true in America as well, but does the fault land on the influential celebrity, or the masses who let themselves be so easily influenced?

At least now we know that the British are as malleable and celebrity-obsessed as us Americans.

The stories — at least the responsible ones — admit others factors are at play. For one thing, the changing British lifestyle is seeing more people living in cities and small apartments, where small dogs are perceived as easier to care for. More important yet is the changing role of dogs worldwide — their transition from workers to companions.

The Manchester terrier, for example, is on the list — a breed originally bred for catching rats, but one which is no longer needed for that purpose.

Here’s my idea: An exchange program, if you will. England sends a couple hundred Manchester Terriers to downtown Baltimore. In return, we send them Britney and Paris.