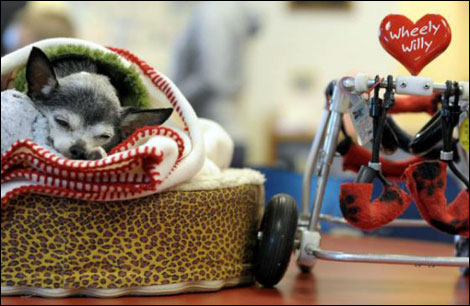 she also got a call from the people who owned the trademark to chilly willy, the cartoon penguin: we really think willy’s a great dog and all, but drop the name or we’ll sue, was the gist of their message. and that’s how chilly willy became wheely willy.

he did animal planet (where he remains one of their highest rated shows), national geographic and the talk show circuit, sitting down with mike and maty, leeza and tammy faye baker.

the publicity led to personal appearances. and soon every hospital and elementary school around wanted to book him. deborah even did some high school graduation keynote speeches, giving some version of the “i can” speech with willy by her side.

he made kids on chemotherapy laugh for the first time in weeks. and a woman in an alzheimer’s home in los alamitos saw willy and broke into “silent night,” singing the entire song, word for word, and prompting nurses to phone the family so they could quickly drive over and see their mother speak again.

together, willy and deborah traveled the globe, making appearances in germany and canada. “he’s particularly popular in japan,” she says. 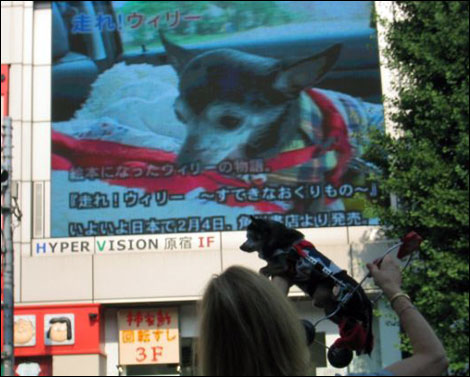 she and willy met prince hitachi and princess hanako a few years ago. when they saw the dog, the royals got down on the floor, causing a minor sensation. out on the streets of tokyo, pictures of willy flashed on the giant jumbo trons.

willy’s story made it into the “chicken soup for the cat and dog lover’s soul” book. in “working dogs: tales from animal planet’s k-9 to 5 world,” his work in the spinal unit at the long beach veterans hospital (where his picture still hangs) is documented. his story is even on the standardized reading proficiency test given to school children in texas.

sometimes someone would ask if willy did any tricks. “his trick is that he can wake up every day happy,” deborah would tell them.

a rainy day last january marked the beginning of the end.

on new year’s day she met me at a coffee shop, carrying a little royal blue velvet bag. inside was a round tin of willy’s ashes.

that’s the part she should listen to.

the miraculous story of charity the chihuahua