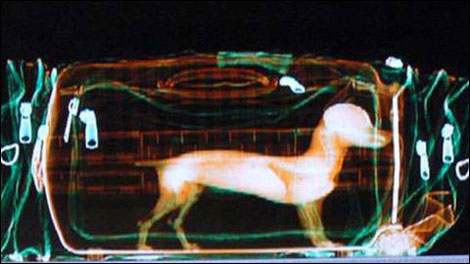 famous chihuahua® was shocked to discover that a man actually attempted to smuggle a living, breathing chihuahua dog past airport security by packing it inside a suitcase! just what was he thinking?! here are the details of this upsetting chihuahua story:

dublin airport security staff came across a man that appeared to be trying to smuggle a chihuahua dog into ireland.

the staff made this discovery after passing a handbag that the man was carrying through an x ray scanner and seeing that their appeared to be a dog hidden inside.

customs officers at the dublin airport said that they first believed that the dog, which was a chihuahua, was nothing more than a stuffed toy when the outline showed up on the monitor. however, they later found out that it was indeed a live animal when they opened the bag for a closer inspection.

the very tiny teacup chihuahua dog, which was inside a cage that was within the luggage itself, had arrived at the dublin airport from madrid with a bulgarian man. the dog was handed over to officials of the department of agriculture and food and is currently in quarantine.

a spokesman for the airport said that officers did find a chihuahua dog in a small cage inside a hand bag. the custom officers saw it when the bag passed though the x-ray machine. the dog appeared to be in good health.

the man who brought the dog in the case was later arrested at dublin airport. it is still not  known what the man was charged with or what will be the result of his crime.