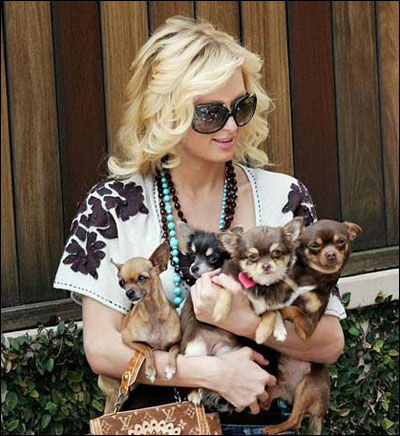 is paris hilton to blame for the abandoned chihuahua epidemic?

sfgate.com reported that paris hilton has been blamed for an epidemic of abandoned chihuahuas in california animal shelters because she’s made toting around chihuahua puppies in tiny handbags a major trend.

the hotel heiress was investigated last year after admitting she owned 17 dogs, allegedly breaking u.s. laws that ban non-breeders from having more than three per address.

animal shelter bosses in santa barbara have now prohibited anyone under age 21 from adopting a miniature pup after seeing a growing trend of young women dumping their full-grown dogs when they’re sick of caring for them.

activists are now blaming hilton’s menagerie of teacup-sized chihuahuas for the growing problem.

chihuahua club of america head lynnie bunten tells the national enquirer, “chihuahuas are not a toy or a fashion accessory. but because some people think they are — then realize they’re wrong — there’s a growing problem of abandoned chihuahuas.”

famous chihuahua wants to know what you think.

is paris hilton to blame for accessorizing the chihuahua and for the growing problem of abandoned chihuahuas or is this really about careless and spontaneous decisions being made by uneducated young women?

if you love chihuahuas, adopt one. help us help abandoned chihuahuas everywhere by rescuing them from a shelter and providing them with a home.