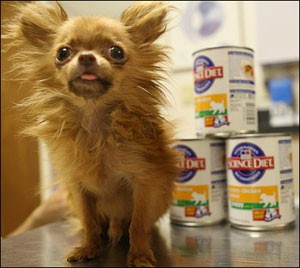 Tiny Dancer was barking up the wrong tree last year. The diminutive Chihuahua came close to grabbing a Guinness World Record as the world’s smallest dog, but other pooches turned out to be even smaller than the 5-inch-tall Lake County pup.

Now, Dancer’s owner has embarked on another quest: to have the teensy fellow named the world’s smallest therapy dog. Dancer recently spent weeks in training to learn how to help hospital patients and others in need of some cheer.

Jenny Gomes of Okahumpka said Thursday that several therapy-dog certification agencies turned Tiny Dancer down because of his size. But the little guy overcame defeat, tried, tried again, and finally received the paperwork.

“Everybody says teeny-tiny dogs can’t do anything,” Gomes said. “Now everybody can say, ‘Hey, look what the little dog can do.’ He’s not just a purse ornament.”

In fact, he would be in a class of his own if the people at the Guinness World Records want to declare him the record holder. Guinness officials would have to create a category for smallest therapy dog.

Gomes, 41, said she would hear back from the United Kingdom organization in a couple of months.

Last year, Gomes said she hoped that Dancer would win the title of smallest living dog by length. But it wasn’t to be: Ducky from Massachusetts came in at 4.9 inches. And Boo-Boo from Kentucky beat Ducky at 4 inches tall. Both gave Dancer a thorough sizing down.

Gomes said Dancer has been visiting the elderly and sick people since the middle of last year.

Since Dancer was certified by the Eustis nonprofit Caring Canines in January, he and Gomes have visited the Sorrento-area Camp Challenge, for children and adults with cognitive and physical disabilities, and Eustis’ Camp Boggy Creek, for kids with life-threatening and chronic illnesses. They have also stopped at schools around Lake County.