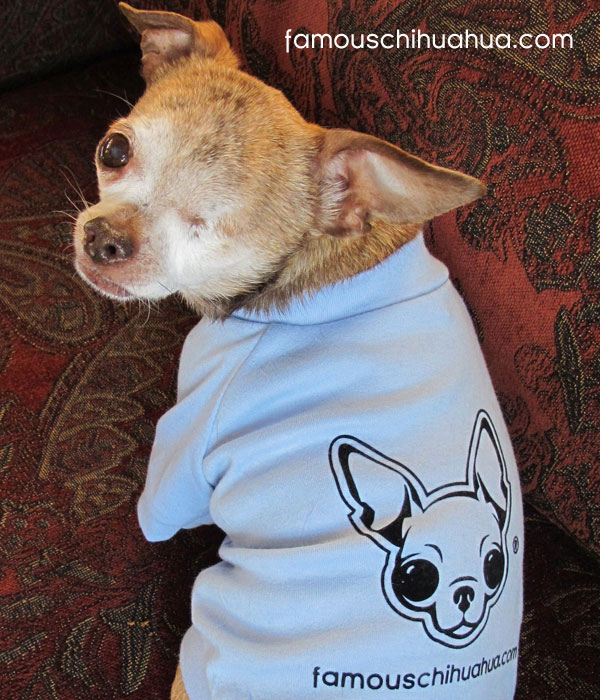 we don’t know harley’s exact age, but the vet thinks he’s about 12. until last april he spent his entire life as a breeding dog at a horrible puppy mill, living in a filthy cage, no exercise, no medical attention, no kindness from anyone. he’d never been loved.

when he was rescued by because of you chihuahua rescue in Oklahoma, harley had heart failure, his lungs and stomach were filled with fluid to the point where it was coming out his nose, his teeth were all rotten and needed pulled, his spine was fused in 2 places from arthritis, his tail was broken, his long nails had caused his toes to deform and he’d lost his left eye. unfortunately. this kind of negligence is common in puppy mills as they often clean cages with a power washer and don’t remove the dogs.

harley was clearly a ‘special needs, senior’ and could only go to a particular home, luckily that was us. our vet didn’t expect him to last 3 months, but harley kept getting stronger and healthier. he gets daily medications and we can’t let him exert himself too much because of his heart condition. we made a promise to harley that we’d do everything possible to make up for the sad life he once led and show him what it’s like to be loved. he’s the most grateful dog in the world! everyone loves him and he loves everyone!

puppy mills are terrible places. the thousands of breeder dogs are used until they are worn out (usually at approx 5 years of age), then typically killed. they never experience a kind touch. we aim to make people aware and informed about the difference between negligent puppy mills and responsible breeders.

please join us in support and volunteer for organizations like mill dog rescue, because of you chihuahua rescue and a soft place to land dog rescue so we can continue to rescue and save wonderful little dogs like our harley.

help us spread the word with a “save a life, adopt a shelter pet” dog shirt! click here!