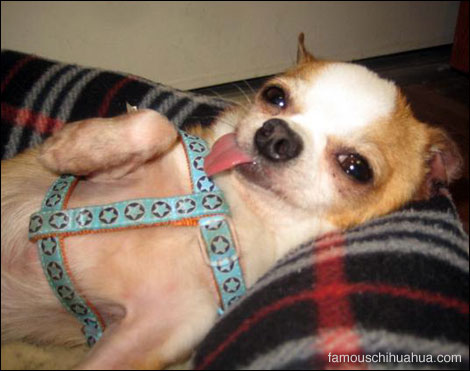 famous chihuahua® is proud to introduce elrico the chihuahua!

elrico is a 3 year old chihuahua that only eats little champions and hard cat food! he was born of a chihuahua breeder and loves to play with shoe strings and little puppies.

baby elrico is very tiny and weighs only 2 1/2 pounds. he dislikes big dogs and isn’t scared of them. my aunt has a big pit bull named peetie that is a very sweet dog, but elrico doesn’t like him. in fact, when they first met, i was a little scared because i put elrico down and peetie ran up and started sniffing elrico, but then elrico attacked (which was really an act of defense).

thankfully peetie just thought rico was playing so he didn’t fight back. later, as we were leaving, baby rico was still mad about peetie, so he let everyone know this by growling like he was the boss. it was so cute!

my little elrico has inspired me to enjoy life and live it to the fullest as he does every day. we both love famous chihuahua and visit it every day!

new! famous chihuahua’s christmas collection of clothes for your chihuahua