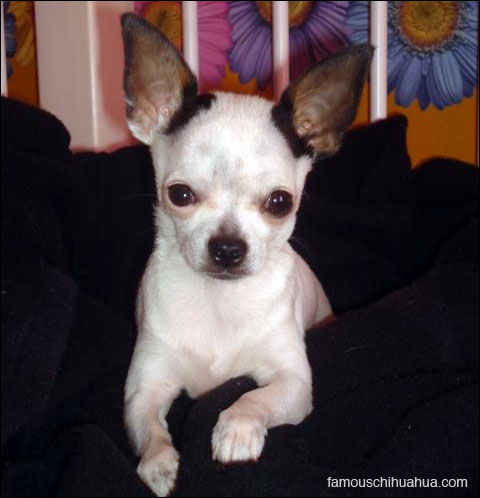 my name is ana and this is charlie my chihuahua. he is 1 1/2 years old and weighs in between 1 1/2 to 2 lbs depending on how much food he’s eaten.

i got charlie from a chihuahua breeder in north carolina. when i first laid eyes on him, he was only a mere 14 oz at 5 months old! the breeder handed him to me and he gave me a huge kiss on my nose and that was it, i knew charlie was going to be my baby! i wasn’t able to bring charlie home until he weighed at least 18 oz, so i had to wait another 2 weeks for him to grow a little bigger before he could join our family.

charlie has 5 stuffed toys that i hand picked for him. he was so tiny that even a small stuffed toy from a pet store was too big for him, so I found him some small stuffed animal toys made for babies that came in mcdonalds kids meals. they were the perfect size. i also had trouble finding him a chihuahua collar or harness that fits properly.

little charlie lives with me and 4 other dogs in north carolina. he protects his toys from all the other dogs and his favorite play toy is his stuffed rabbit! he shakes it around and around and then lets it go flying through the air.

charlie saw snow for the first time last year. he didn’t know what it was at first, but he soon started to run and play with the other dogs in it. charlie loves to pose for pictures. everytime he sees me with the camera in my hand, he will stay still and pose to give mommy that special picture.

charlie is so tiny that he was already 9 months old when he finally was able to go up and down stairs. even now charlie can’t jump up onto the sofa and forget about him jumping off it. i have to lift him up onto it and then also put him down on the floor when he wants to get off.

charlie can now wear chihuahua clothes, but when he was 7 months old everything was huge on him. i couldn’t even find him a sweater to wear for cold days. my mom knitted him a sweater that he wore so much it ended up getting a hole in it. he is now finally big enough to wear chihuahua clothes, collars and to play with many toys, but he is still so tiny that i have to protect him often where i end up holding him so he doesn’t get trampled on.

little charlie is a very special tiny chihuahua, but don’t tell him he is tiny because he thinks he is a great dane when it comes to protecting me. the other day a friend of mine came to visit and when she was leaving she went to hug me good-bye and little charlie lunged at her like a fierce wolf! i had to pull him back and my friend jumped back and said it was okay, he was just protecting his mommy.

so yes charlie is very special to me and no matter what, he is a famous chihuahua to me in every way!