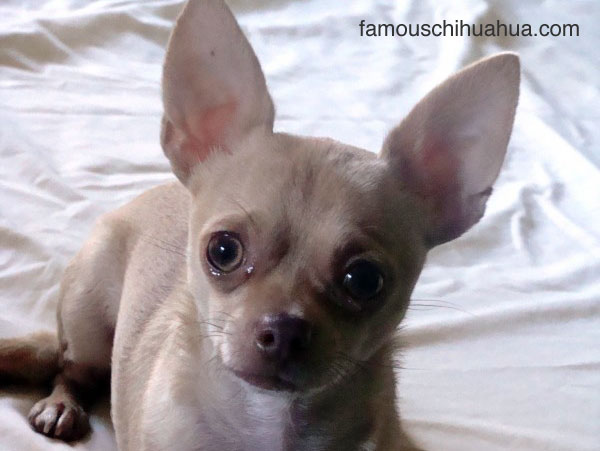 this is ollie. he’s one of my two chihuahuas, the other being a long-haired chihuahua i call my pretty boy, marty. ollie came to me when his original owner couldn’t keep him anymore and i’d just gotten marty so it worked. they are six months apart in age and both born in 2008. i had two adolescent boy chihuahuas wrestling both literally and figuratively for my attentions.

the saying is true; a girl chihuahua will love you, but boys will be in love with you. they follow me all over the house no matter how many times i run to the kitchen for something. ollie is a cuddle bug. He’s less than 5 pounds and life’s not right unless he’s snuggled up against you. much like myself, ollie is skeptical of strangers, but once he gets to know you he won’t leave you alone.

ollie has claimed all the toys in the house as his. when he feels it’s “play time” he brings me his favorite little stuffed chicken, aka “chickie” daring me to “touch it.” I won’t tolerate any real aggression with both, so it really is in play that he growls and teases me with it until i wrestle it away and toss it. off he runs and he’s back with it like a rubber band. Hide it and he won’t stop looking till he finds it jumping tall couches, over bodies, or delving deep under a pile of sheets.

i live with my father. He has always been there for me and is still now making sure I am taken care of. however, we are very different people and don’t always agree on things. a peaceful co-existence would be the best description of our relationship. As with many things, he didn’t see what I saw in having a pet. So when I talked to him about getting marty, i planned my argument well. I told him a Chihuahua can stay in small spaces out of his way.

my argument was good and he agreed as long as he “had nothing to do with keeping him.” ollie came in the door a few months later under the guise of being a “foster” situation, which it was at first. they stayed in a large crate while i was at work and over time my father’s attitude changed dramatically. ollie and marty have warmed his heart. he even seems jealous at times with comments like, “when you’re home they see only you.”

now he asks me if he should take them outside and he won’t get up out of his chair if they are sleeping in his lap. just recently he offered to and even paid for their last vet visit. ollie initiated all this by crawling under his jacket one day to sleep on his chest while he was resting in his chair.

how has having chihuahuas changed our lives? they made us a happier, healthier family. now i come home to an enthusiastic two chihuahuas with body wiggles, kisses, tail wags and a proud report from my father on how long they’ve slept in his lap today. it’s true, there really are health benefits to chihuahua ownership, everyone should adopt a chihuahua!