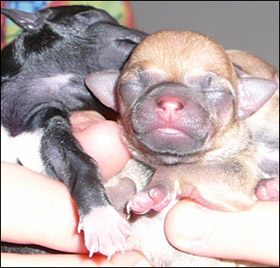 Very tiny members of the chihuahua breed are often referred to as “teacup” Chihuahuas or sometimes as “toy” Chihuahuas, but those are marketing ploys rather than actual varieties. Be wary of breeders who use these terms. What they are doing is advertising what is essentially the runt of the litter as something special or valuable, says Micki Giroux, a Chihuahua breeder from Panama City Beach, Florida.

What you may get instead is a dog with health problems and a shorter life span. The Chihuahua Club of America (CCA) does not categorize the Chihuahua by size. The Chihuahua itself is a member of the Toy Group, but there’s no such thing as a toy Chihuahua or a teacup Chihuahua. Neither term is mentioned in the chihuahua breed standard.

According to the CCA, just as humans differ in height, weight and other physical attributes, so do individual Chihuahuas. They are male or female and long coated or smooth, bu that’s as far as their descriptions go.

The CCA is concerned that labels, such as teacup, pocket-size, tiny toy or miniature, may be used to persuade buyers that puppies described with these terms are more valuable, but they are not. Extremely small Chihuahuas are adorable and can be perfectly healthy, but be aware that they may require extra care to keep them safe.

Do you have a small chihuahua that was sold to you under the title of “teacup” or “pocket-size?” What is your opinion on the teacup chihuahua marketing scam? We want to know. Perhaps we can prevent others from being scammed. Post your comments below.