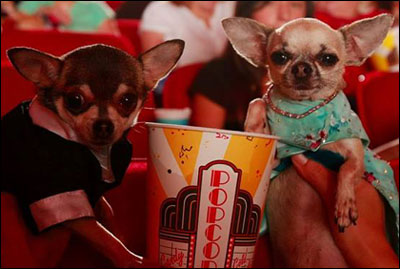 most of us would be excited to see our best friend in a movie, but lynnie bunten has mixed feelings about beverly hills chihuahua.

sadly, she speaks from experience. whenever a chihuahua has been featured in entertainment in the past, it’s been followed by a spike in the number given up by people who didn’t realize what they were getting into.

“chihuahuas shouldn’t be mistaken for people or celebrities”

it’s easy to fall in love with movie stars, especially when the stars are perfectly trained by professional handlers like the glitzy darlings in disney’s oct. 3 release.

remember, the dogs are playing roles. the real-life personalities of various breeds might not be what you expect. in the case of chihuahuas, don’t think laid-back lap dog just because they’re small. read the chihuahua breed standard carefully, particularly on temperament.

chihuahuas are feisty, independent and driven, but because they’re little, people treat them differently. that can mean trouble.

to start, says bruce shirky, president of the chihuahua club, people tend to be “grabby” with small dogs. most of us have the sense not to reach out for a strange rottweiler, but it’s hard to resist the desire to hold something cute and tiny.

combine that with the fact that chihuahuas tend to become attached to one individual, meaning they’re not terribly friendly to strangers, and don’t be surprised if your little cutie defends itself vigorously.

their size combined with their assertiveness can get them into trouble with other dogs, too.

“they will challenge every other dog regardless of size. that can be suicidal,” says katie greer, who spent 15 years training chihuahuas in the sport of agility.

early socialization and training are critical to keep potential aggression in check. unfortunately, owners have a tendency to neglect training with small dogs, a big mistake in a breed with the chihuahua’s temperament.

in addition, shirky advises, don’t carry your dog in a purse, which just increases the risk that someone will reach for it and get bitten.

“chihuahuas are famous for being tyrants because people don’t treat them like dogs,” says greer, who lives in balch springs, texas.

their drive and intelligence make them great for agility training, which involves a complex race course over different obstacles, but a problem for many owners. in training, “you have to be smarter than the chihuahua, and you have to convince the chihuahua that it was the chihuahua’s idea. this is not a tiny golden retriever.”

neglect of training may even extend to housebreaking, because a small mess may seem easier to tolerate at first, then fray an owner’s nerves over time. many chihuahuas are given up to rescue for this reason, bunten says.

chihuahuas aren’t generally recommended for families with small children. along with their size, a soft spot on the top of the head that they’re born with, like human babies, never closes in some adult dogs.

if you’re up to the challenge of a chihuahua, rescue is a great place to start. you’ll be dealing with people who know the breed, and the personality of an adult dog is already clear.

if you want a puppy, shirky advises, buy local so you can make sure it’s being socialized properly from the beginning. the litter should be raised in a high traffic area of the house and have lots of visitors.

and be wary of the description ‘teacup chihuahua.’ there’s no accepted definition of the term. if you get a particularly small pup, they have more health problems and tend to live very shortened lives.

smart, funny and loyal, their fans agree, chihuahuas can be a handful – but that’s what they love about them.

“the world is theirs – they own it, and they allow other people to come into it,” greer says. “they make me laugh when I see them out thinking me.”