the number of chihuahuas in dog shelters nationwide is growing daily. the following article was written in an attempt to make people aware of this. the message is simple; if you love chihuahuas, adopt one. 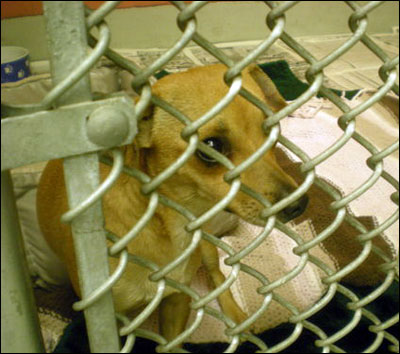 if ever you needed another reason to despise paris hilton — utter vapidity, being famous despite having no discernible talent, overuse of the teeth in her sole legitimate screen role — the folks at san francisco animal care and control (acc) have found one. they are up to their ankles — literally — in chihuahuas, a condition they blame on “paris hilton syndrome.”

rebecca katz, animal control’s aptly named acting director, confirms that a couple of chihuahuas a day are showing up on her doorstep; she currently has enough teacup dogs to start her own miniature iditarod team. chihuahuas make up about 20 percent of all the dogs at the shelter. it’s a condition staff blame on the confluence of a lousy economy with “cultural” figures like hilton as well as films like legally blonde or beverly hills chihuahua, in which the purse dogs were feted as fashion accessories.

the number of owner-surrendered pets has jumped 13 percent in the last six months, and chihuahuas are disproportionately represented. katz additionally suspects that the city’s spay-and-neuter message has not penetrated the chihuahua-in-purse community. this prompts two questions: 1. what’s going on in those purses? and 2. can we blame paris hilton for this, too?

on a recent trip to the shelter, visitors were greeted with a multipart harmony of chihuahuas yodeling. one of the feistiest of the musical little dogs, sonny, had inexplicably languished in a holding pen. with time running low, shelter employee christine scanlon finally relented and adopted the critter. and since he’s actually named after the famously well-equipped godfather character sonny corleone, it’s apt that sonny is too big to fit in a purse.

ankle-biter dogs aren’t the only animals flooding acc these days. staffers are bracing for the annual post-easter plague of bunnies. these will join a batch of 10 albino rabbits that actually came in before the holiday, when a band of druggies getting high near candlestick park realized the bouncing bunnies they initially took to be hallucinations were actually real. the socially responsible stoners immediately phoned acc (what a city).

anticipating impulse adoptions — and quick returns — acc actually refuses to give up any of its bunnies in the days prior to easter. for that matter, black cats are not adopted out on oct. 30 or 31. and no leprechauns are released prior to st. patrick’s day.

“we like to keep those as shelter pets anyway,” katz quips.