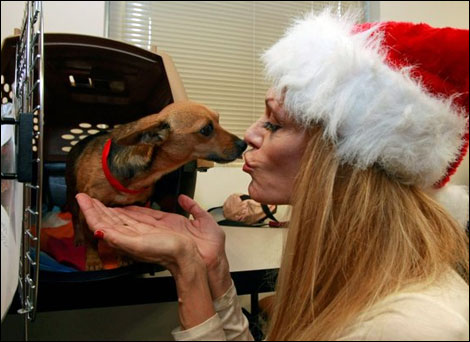 famous chihuahua® is happy to report the success of project flying chihuahua, a chihuahua rescue operation working to rescue a surplus of sheltered chihuahuas in the state of california.

hundreds of homeless chihuahuas are being flown to eastern states, where there is a shortage of available small dogs to adopt. here are the details of this california chihuahua crisis rescue story.

chihuahuas have been flying out of california since other states learned about the glut of little dogs in the golden state.

a group of 25 dogs has already arrived at the humane society for greater nashua in new hampshire, thanks to “grey’s anatomy” actress katherine heigl, kinder4rescue in studio city and american airlines.

a group of 43 will leave for new hampshire on monday or tuesday, said kathy davis, interim general manager of los angeles animal services, who took part in a news conference friday to announce project flying chihuahua. they were supposed to leave saturday morning, but bad weather in the east caused a delay, she said.

the nashua shelter found homes for the first 25 and had a waiting list of 100 people, miss davis said.

miss heigl’s foundation has paid the discounted airfare for all 68 dogs so far, she added, and new donors for more flights were being sought.

the dogs will be processed and should be available for adoption on dec. 29, she said.

miss buchwald said she didn’t know how many to expect, but each dog will be escorted by a volunteer and virgin will provide travel for both dogs and humans.

the airline also is expected to offer a week of half-price trips to passengers willing to escort an animal to new york, but details have not been finalized, miss buchwald said.

a call to a virgin america representative was not immediately returned.

dozens of dogs have been sent by oakland animal services to nearby states such as washington, oregon and arizona, but most of them were delivered by sport utility vehicle, director megan webb said, because there wasn’t enough money to fly the dogs to more distant states.

chihuahuas’ popularity grew in california as hollywood featured the dogs in movies such as “beverly hills chihuahua” and “legally blonde,” and they became constant companions to the rich and famous. backyard breeders saw a chance to make hundreds of dollars a dog, and the crisis developed as the recession forced some dog owners to abandon their pets.

california shelters soon found that chihuahuas made up 30 percent or more of their dog populations.

meanwhile, miss buchwald said, there has long been a severe shortage of small dogs in the east.

officials on both sides of the country are optimistic that they can work out the imbalance.

miss davis said finding homes for 68 barely made a dent in los angeles shelters, but it was a start.

“we have plenty more where those came from and we’re more than happy to send them home for the holidays. if there’s a santa claus out there, we’re ready and waiting for you.”

los angeles has more than 300 chihuahuas in its shelters, miss davis said, and the shelters are taking in about 340 a month.

“the majority of them are healthy. they do need some socialization. some we’re finding haven’t been well-treated in the homes they’ve been in. they need some tlc,” miss davis said.

do your part this holiday season, adopt a chihuahua and give them the gift of a new home!