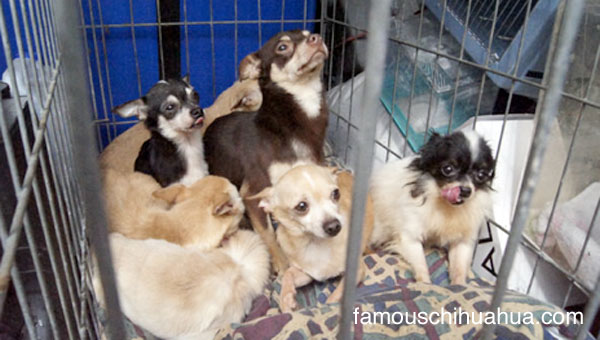 famous chihuahua would like to extend a big thank you to the concerned citizen that reported the squalid living conditions of 33 chihuahuas to the oakland and milton humane society last week in toronto, ontario. we are always thrown by the imbecility of careless pet owners who act in such an irresponsible and wreck less manner overlooking the seriousness of their actions.

why must 33 innocent chihuahuas be subjected to such a filthy unsanitary living environment putting their health at risk when there are plenty of responsible people looking to adopt and care for a chihuahua? what do you think?

here is the full story of these 33 innocent chihuahua rescued from squalor...

A Toronto-area humane society said on Thursday that it has seized 33 Chihuahuas after they were found living in squalid, unclean conditions.

The Oakville and Milton Humane Society said it removed the pack from an Oakville, Ont., home last Friday after a community member became concerned about the animals and contacted police.

The Chihuahuas, which range in age from two-year-olds to adults, were immediately taken to be assessed by a veterinarian, said Brenda Dushko, a manager at the humane society.

“A lot of the issues are more social. They are very timid and shy, they haven’t been socialized.”

Dushko said the dogs had been found living in cramped, squalid conditions. Their cages, stacked on top of one another, had not been cleaned in some time and the home reeked of urine and feces.

None of the animals had been spayed or neutered, she said.

Dushko said the dogs’ owner admitted that he had been overwhelmed by the burden of raising so many animals.

Medical testing is still being done, but the humane society says they are expecting the animals to recover and go up for adoption soon.

Adoption information is available on their website at www.oakvillemiltonhumane.ca or at the shelter at 445 Cornwall Rd. in Oakville. Donations are also being accepted.