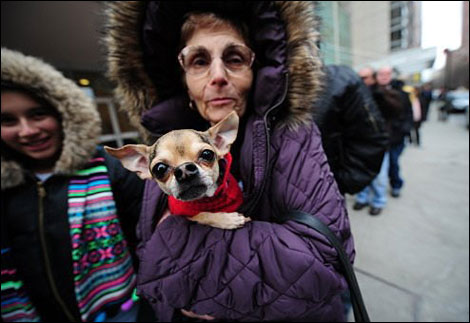 famous chihuahua® loves new yorkers! we are sending out a huge thank you to all new yorkers who came out to rescue a chihuahua this week. here are the details behind this awesome chihuahua rescue story!

new york is, like, totally awesome — especially when you’re an abandoned californian chihuahua. fifteen of these goggle-eyed living toys, best known for inhabiting the handbags of paris hilton and other hollywood b-listers, became new yorkers wednesday after being rescued from the west coast.

the evacuation was in response to what the american society for the prevention of cruelty to animals (aspca) calls the “massive overpopulation of chihuahuas in california.”

“all of a sudden they found themselves with these chihuahuas,” said diane wilkerson, director of the aspca volunteer program.

she blamed a change in hollywood trends and the sour economy for an increase in homeless chihuahuas. but “small dogs are very, very popular here in new york, so there seemed to be a really nice way new york could work with this.”

the rescue operation maintained the luxurious standards to which the chihuahua breed is famously accustomed.

all 15 flew in the cabin of a virgin america jet from san francisco last week and took up residence at the shiny aspca headquarters in manhattan.

more than 100 new yorkers lined up in icy temperatures to get their chance. some waited from 8:00 am to midday to be sure.

“they got famous. i watched them on channel 2, channel 7, channel 4,” said oleg, 62, a russian immigrant at the front of the line.

“the dog i take will be really lucky,” he said in his still pronounced accent. “he’s going to live with me and sleep next to my bed.”

amoura leigh, 21, planned even greater delights for her dream chihuahua.

leigh, sporting pink hair, pink eyebrows and studs through her bottom lip, said chihuahuas are perfect pets “because they like to be held and I like to hold them.”

“and dress them up,” she added. “a pink rhinestone chihuahua collar, oh yes!”

a chihuahua bought in a pet store can cost anything from 700 to 1,400 dollars, dog lovers in the queue said, so a free animal is a big attraction.

but while chihuahuas are small, they are not maintenance free — a realization that may have led to fashion-crazed californians dumping their pets in shelters.

“they’re not accessories,” wilkerson said. “the novelty wears off. they think this isn’t fun anymore.”

“they’re aggressive and very protective of owners. they love to snap,” said mari anna ficco, 45. “but they also like to dress up. they know they’re cute. they’re drama queens.”

not everyone in new york went gaga over the miniature exodus.